Ok, so I need to preface this post with a little info about how China adoptions work. A very long story short, to adopt from China you go through months and years of paperwork, home studies, and all kinds of mile markers, and then at the end of that very long process you get your final piece of the puzzle that puts your official trip to China in motion, the US Consulate appointment. One of the families on our trip referred to it as D Day. Its literally, the one event that the entire trip to China to pick up your child is scheduled around.

So, with that in mind, and some high expectations, we set out this morning to the US Consulate. Now, when you hear the term US Consulate it might stir in you ideas of a nice building with some marble work and some cool statues of George Washington or something, right? Wrong. We got the to the building and were lead through a busy, typical Chinese building lobby, to the 4th floor. On the fourth floor it looked more like a mall that was filled with stores, but rather than them being actual stores they were air line travel offices, it was odd. Then we stood in line to go through “security” (I’m going to start putting “” around the word security when I talk about it in China, because their version is “security” is not very secure) outside of what appeared to be a lounge. So, it was a really odd juxtaposition (props to my bro Alex for that word), adopting families with squirmy, loud kids lining up outside of a lounge were people were eating and drinking.

Anyway, we made it through “security” and went up the escalator to the US Consulate. So, the US Consulate in Guangzhou, how to describe it well… Imagine the DMV that you usually go to, now make it smaller in your mind, and now make it a little dirtier, and now put in some old kids toys and odd kids books and now you have the picture.

One of the highlights of our little wait in the waiting room was the discovery of a book called “The Buck Stops Here” that was a rhyming book about all of the US Presidents. I laughed pretty hard when the book talked about all of Bush’s catastrophes and about how Obama brought hope in a time of trouble. Hmmm, seemed a little biased. The book also had a relatively calloused rhyme about how JFK was another president to get shot. Very strange, if only I had been allowed to have my camera with me we would be laughing about the rhymes right now. But, no electronics allowed, so there you go.

Anyway, we were then instructed by an American that spoke fluent (American) English, which was a nice change. We recited a little oath and then were called to the window to do 5 minutes of paper work… and we were done! So, our whole trip was based around an appointment that took 5 minutes, cool. Though, in all fairness, they do take another 24 hours to process his Visa, so that is probably the big part of it. Anyway, it was over.

After nap time we went out do dinner with some other friends that we have met while adopting. Unlike the other Americans we have met, this family is fluent in Mandarin. We really enjoyed hanging out with them. The coolest part of the evening was seeing Samuel and the dad (of the other family) play a bit. Seeing Samuel play with someone that can speak Mandarin to him was really neat. He really is all boy and had a great time.

A note about how Samuel is adjusting. Overall he is doing really, really well. He hasn’t grieved for his foster family as much as I had expected. That might be because he is so young, and it might be that he will grieve more later. He has really come out of his shell with us over the last two days and is pushing limits in a major way, as two years olds tend to do. The hard part for us is trying to tell him no so that he really understands what we are telling him not to do, and then providing some discipline for him that is healthy for a newly adopted child. I do think he is getting the picture and starting to understand some things, but I also know that we have a long road ahead of us in order to gain understanding and discipline.

Again, overall he is doing great, happy and healthy and a lot of fun. Tomorrow we are heading out to do a little more shopping around town and then we will see what other adventures we can get into. Until tomorrow, that’s it for today’s China adventure. 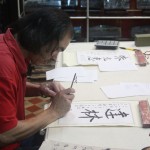 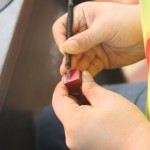 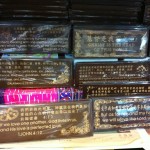 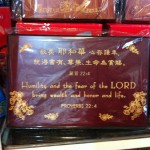 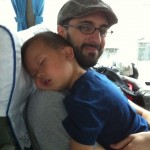 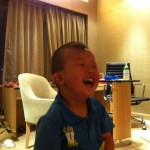 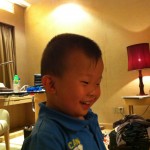 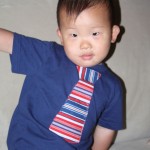 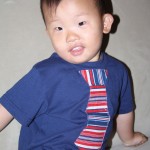 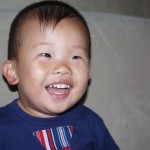 Posted in The Story, Travel